A connection between the tactics used in ancient cavalry and modern tank warfare is apparent. Massing cavalry units to break through enemy lines has been a successful tactic since the beginnings of cavalry forces. OK, maybe not the beginning, but over the past 2000 years.

Chariot warfare started thousands of years before cavalry, around 3500 BC. A lot of people

compare the roll of ancient chariots to tanks. (Who? a wiki site would ask, lets just say I’ve run into them.) The problem with this is that at the peek of effectiveness, and they were effective, they were used more as mobile missile platforms. The Egyptians reached the height of their power with swift chariots that quickly moved archers into position to rain pharoahic doom down upon their enemies. These chariots were made to be light and only had an archer and driver. Their greatest rival, the Hittites, liked to make a tougher chariot and supply it with a spear man to boot. However they may not have always avoid smashing into enemy infantry formations.

Later users of chariots did actually use them as a blunt object to try to break up infantry formations, however this is much later after chariots had went from the lords of the battle field to some sort of trick up your sleeve. Famously the Persians tried to send scythed chariots into Alexander the Greats massive wall of men wielding spikes. The story is that they simply cleared a path for the onrushing chariots and picked them off with javelins or their long spears. However, undoubtedly, some of them did die and it was annoying to those in charge of keeping  formations. There are a few engagements were this did work, but in general their performance was lac luster and didn’t compensate for the high costs of chariots. The reason for this dip in combat effectiveness was due to the rise of the mounted cavalry.  Comparatively, they were coming up short and ending up a novelty. 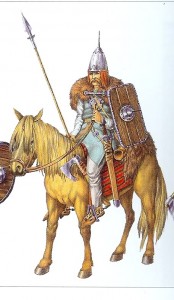 When you throw in some examples of ancient chariot warfare in India and China, you can draw more conclusions of chariots being used in the same manner as modern tanks would be deployed. However, I would argue that at this point they lacked the effectiveness to be compared to modern tanks as a decisive tactic. This all changed with cavalry.

Alexander used his heavy cavalry to smash through Persian lines in much the same way the Germans did in World War II did through the Allied lines, be that on a much grander scale. However, tactically it was the same thing. Basically, while the infantry closed ranks with the enemy, a mobile spear head would thrust through the enemy and wheel around against the opposing line. There are  thousands of examples in military history of both armored divisions and cavalry executing these same maneuvers. More obvious comparisons can be drawn when comparing the encirclement of the Germans forces at Kursk with tanks to the surrounding of the Romans at Cannae by Hannibal.

One key difference, and as military history has progressed since World War II is that air power has become dominant. Much like the chariot had its day, modern tanks too have lost their position as masters of the battle field. As military history moves forward, undoubtedly, another variation of the armored assault will develop. I’m sure their designers will have both blitzkrieg and cavalry in mind.