This is a tough question, due largely to the different armies and definitions of what makes a 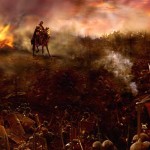 great general. So, I’m just going to skip the explanations since it’s a personal judgment thing anyhow.  Now, without any further blathering, here is the official list of the greatest ancient generals from Ancient Military History!

1) Scipio Africanus
He was undefeated, succeeded where others failed given the same armies and he defeated Hannibal. Good job Scipio!

2) Alexander the Great
He was undefeated, but lets face it, his dad gave him that awesome army and even the plan to attack Persia. However, that being said, he did conquer a huge empire and a big chunk of the “known world”.

3) Julius Caesar
He was a good general with a great army. He bested both Roman and Celtic armies, but he’s a little lower on this list than might be expected. The reason is that despite his shameless self-promotion he did end up getting himself into a lot of bad situations. He got out of said situations, but why was he there in the first place? Caesar is definitely the luckiest general on this list though.

4) Hannibal
This guy was a genius at strategy in his prime, he taught the Romans a few bloody lessons. He defeated larger armies than his with better tactics. Basically he got the Romans to fight him where he wanted then surrounded them. Unfortunately, Scipio beat him at the battle of Zama, ending his chances to be higher on this list.

5) Cyrus the Great
He founded the Persian Empire and was a bad ass. He also came up with the trick of using camels to freak out the enemies cavalry. To bad a battle with the Scythians cost him his life though, and worse, it kept him from getting higher on this list!

6) Epaminondas
This Theban general and statesmen lived from 418 BC – 362 BC. He broke the military dominance of the Spartans over the other Greek cities and came up with many innovative tactics. At the battle of Leuctra this generals better tactics led his outnumbered Greek warriors to defeat the superior Spartan hoplites. His innovation consisted of making a mass of his best troops on one side of his line and angling his weaker forces away on the other. His calculations where dead on, unfortunately, despite his victories he didn’t survive the war. Even more unfortunately the Thebans didn’t last long on the top of the Greek food chain since the Macedonians came down and took over just 27 years after his death.

7) Sulla
He was the first Roman General to basically take over the empire at sword point. He didn’t lose a battle and basically kicked everyone’s buts that he met. This guy was awesome, Sulla was a highly original, gifted and skilful general, never losing a battle. He remains the only man in history to have attacked and occupied both Athens and Rome.

8) Sargon the Great
Now, I’m not really sure if he was a great general or just a great political strategist with a kickass army but this guy built what is often cited as the first empire. He went around ancient Summer and kicked but until his reign was cut short by a plane crash. Maybe that was Buddy Holly though?

9) Attila the Hun
Well, this guy may or may not have been the greatest general but he certainly caused a lot of destruction and had huge cajones. They didn’t call him the “Scourge of God” for nothing, he did however lose the Battle of Châlons and he was leading the greatest military force in the western world so he is deservingly low on the list. I mean come on, those Huns were crazy accurate archers and born in the saddle, they should have taken Rome.

10) Marius
Credited with forming the Roman Military into what we think of today, Marius was a soldiers general. He definitely increased the size of the legions, and bettered there training. On the battlefield he defeated two massive hordes of German invaders that had previously wiped out two entire Roman armies.