I have long been a fan of constructing ancient weapons and have found great joy in it. This summer I’m taking on a new project, a Spartan spear replica. It sure will beat a walking stick for hikes, particularly if a bear comes along. For its materials I’m going to be using Spartan Weapons as my source. The ancient Spartan warriors used a wood called cornel wood for their shafts. This is a very strong wood, known for its density. Unfortunately, it doesn’t grow in the US so I’ll be forced to improvise. The Saxon warriors (among many others) used the ash tree for this purpose. The word ‘ash’ is actually an old English word meaning spear. Ash trees have a hard wood, but it is also elastic, as its tight grain is resistant to splitting. Because of this is commonly used for bows, tool handles and baseball bats. In fact ash was used to make early car frames due to its ability to flex allowing it to function as part of the suspension system. The Morgan Motor Company of Great Britain still makes sports cars with frames made from Ash to this day for these reasons. Ideally I’ll be able to find a straight sapling for my Spartan Spear or dory as they called it. The shaft should be about 7-9 feet long.

The construction of the spearhead is out of my league however, I will be subcontracting this part of the weapon out. I will be using an authentic dark ages black smith, and hoping he doesn’t charge to much. (It will probably run in the $40 range). Iron was the most common metal used by the Spartans for spearheads, followed by bronze. I’ll be providing the black smith with images of Greek spearheads in order to ensure we are on the same page but I doubt this will be necessary as he is experienced in constructing them already. I just want to make sure that it is a narrower head like the examples found in museums as opposed to a wider head seen sometime in art and on film. Greek spearheads featured a long socket neck that the weapons shaft will fit into creating a secure business end.

I will also be ordering an iron butt spike. A bronze butt spike was most likely more common but having both ends made of iron certainly wouldn’t be out of the realm of what a Spartan spear would have used, they weren’t standardized to that degree. This will be used for standing the weapon up as well as spearing any lizards that happen by, seeing as the Spartans called this part of their spear the ‘lizard sticker’.

Once I have carved down my shaft and fit it into the spearhead an iron pin will be used to secure it. I will be seeking the blacksmiths advice on this part as well although it will ultimately be up to me to accomplish this. Unfortunately, I’ll be using a power drill to put a hole through the shaft but I’m not into constructing ancient weapon maker’s tools. I will be employing hand tools to form the shaft however.

The last step will be placing a leather grip on it; I’ll be using a wrapping technique to accomplish this. I’m unsure where I have seen images of Greek warriors wrapping their grips before battles. I’m hoping it was from a ceramic or relief and not some image that is stuck in my head from 300 (the inaccurate, although entertaining Hollywood movie). I’ll cut one long strip of untreated leather about 1” thick at the center and tapered at the ends to facilitate ting it in place. This is an area where some more research will be necessary along with a little “living history” trial an error.

Speaking of living history, this is where the fun begins. I will be able to dive into the old debate of weather the Spartan military typically used their spears over or underhanded. Ah, soon the neighbors will think I’m as nuts as my wife did when she found me and my 4 year old son throwing javelins at a couple of dummies. The dummies were old scarecrows she had in the garage and my son found it easier just to charge them and stab.

I’ll post back on my progress, so far finding the right tree has been a challenge but I’ll be spending a lot more time in the woods later this month. I certainly have learned a lot about trees. I’m very excited about this project and would like to hear from anyone who has made a similar Spartan spear or ancient weapon. 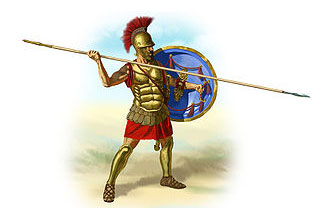