The Most Evil Empires in History 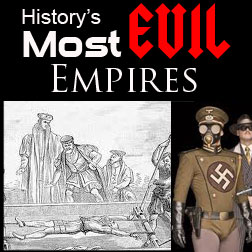 The 5 Most Evil Empires in History

#1 The 3rd Reich (Germany 1933 – 1945 AD) – 100% PURE Evil
You just can’t beat the Holocaust and brutal medical experiments for pure evil, although the attempted mass murder of the entire population of a dozen neighboring countries is a close runner up… Oh, wait, they did that too. I don’t think this is a hard sell so I’m not going to get into how utterly evil the 3rd Reich was, but let’s just say they earned the top spot.

#2 Assyrian Empire (Near East 911 – 605 BC) – Evil, as Policy of the God King
Assyria was a pioneer in terrifying their enemies, and if they didn’t invent psychological warfare they certainly took it to new horrifically dizzying levels. Much like the Nazi’s they had a knack for recordkeeping and doing them en mass, and they put this to zealous use in the form of terrorizing every Near Eastern neighbor. To achieve these evil aims they commonly employed tactics such as the rape of women and mutilating men until death. If a city decided not to throw open its gates at the first site of the Assyrian army they could except to have their heads, arms, hands and even lower lips placed on stakes after the city was conquered. These would then be displayed on stakes placed around the city’s walls as a warning to anyone who didn’t submit immediately in the future. Skulls and noses were placed atop stakes as well and used to decorate the enterances of the fallen city. They must have had little, cute stakes for the lips and noses. Alternatively body parts would be piled up or cut up and fed to dogs. On some occasions, people were blinded so that they wandered throughout the land speaking of Assyrian terrors and demoralizing any population thinking about resistance.

I know what you’re thinking, OK, that’s evil but they did it to terrorize their enemies. Well, they were so evil they actually did it for their own enjoyment too. The king would order the flaying of people alive for his dinner entertainment! When they were feeling nice the Assyrians loved deporting entire populations, by the hundreds of thousands, just to mix things up and they didn’t have moving vans back then. When they weren’t feeling nice mass torture and death was the name of the game. Plus, being truly evil, they loved to brag about it. They had their deeds carved in stone, telling the world what they had done and to horrify people for eternity.

They were by far the most brutal empire in a very brutal time. In fact, it ended up being their demise. While they were at the height of their power they were basically so hated that every neighboring country attacked them at once. They went from the king of the hill to lying on their faces in a matter of months. So hated were they that their enemies decided to put their differences aside for a bit and make sure the Assyrians would never bounce back. The Assyrian cities where wiped off the planet and so forgotten were they that by Alexander the Greats time, several hundred years later, nobody could even say who built their ruined cities. When Alexander came on their massive capitol city’s ruins the locals couldn’t even tell him its name! (Nineveh, we now no from ancient records). They were just that big of assholes!

#3 Stalinist USSR (1922 – 1953 AD)- Highest Total Body Count
The Soviets had an evil twist on the old Assyrian philosophy of terrifying everyone by bragging about what they did. They didn’t tell anyone anything, and it ended up being even more frightening! People just disappeared; they either were sent to gulags and worked to death or outright killed in mass purges. There were no martyrs or events to rally around, people just vanished. There wasn’t even an explanation, people didn’t know why a loved one or neighbor had been taken. There wouldn’t be a funeral or anything, in fact the person’s name would often be removed from all records and artists would be used to remove them from pictures. Stalin would simply make a decree, saying he wanted 10% of the population an area purged for example. Nobody was safe; he had lists drawn up of officials and military leaders to purge as well. There would be rounds of purges, and occasional great purges where almost everyone with a leadership position would be purged.

Stalin was a truly paranoid man, and ironically, the only person he ever trusted was Hitler! Hitler backstabbed him of course, double-crossing him and attempting to wipe him out, along with his government and people. Hitler sited Stalin’s purging of his military officers as a reason for the invasion, predicting that this had weakened the red army to such an extent that in his words, the USSR was a “house of cards and one kick at the door would send the whole thing crashing down.”

Stalin’s paranoia was only matched by his cruelty. He had no regard for human life, or animals for that matter. As if purging people wasn’t enough, they were often unnecessarily tortured into confessions before being shot or worked to death. He didn’t even care to save his own son from the Nazi’s when they captured him, saying they could kill him before he would barter for his life.

Another great crime of Stalin’s was his man made famine in the Ukraine during 1932-33, millions died. Peasants were shot in the street and soldiers stole their food. In the end the population was reduced to starvation and even cannibalism.

It isn’t known how many tens of millions died in Stalin’s purges, brutal human wave style of warfare and man made famines. What can be said is that he did this to his own population though and that he was one evil man. For being responsible for more murders than anyone else in history, Stalin lead the USSR to the third spot in the list of most evil empire ever. (One might think that would be enough to get a higher spot huh? That just shows how tough the competion is!)

#4 Aztec Empire (c. 1376 – 1521 AD) – Mass Human Sacrifice
They almost had it all, Cannibalism, ritually removing hearts, torture, continuous warfare and rule by terror. The Aztecs were obsessed with blood and cruelty. In a famous Aztec ritual the victim was taken to the top of a pyramid for all the spectators to see, were his chest bones were sliced open and his still beating heart was torn out. Apparently there blood-thirsty gods liked this! They had a rigid totalitarian government that used its soldiers to almost exclusively capture humans for sacrifice. Their weapons being designed to maim, not kill. The Aztec warriors delivered tens of thousands of people to be sacrificed each year. In 1487, the Aztecs reported that they sacrificed about 80,400 prisoners over the course of a four day festival for the re-consecration of Great Pyramid of Tenochtitlan. Although this figure has been challenged, as it would have been a difficult pace for them to keep up (averaging 14 killed every minute). Modern scholars have guessed that 20,000 might be a more reasonable number. After all the Nazi’s could only execute 19,200 a day at Auschwitz concentration camp during its peak. To accomplish their high rate of sacrifice the Aztecs had four sacrificial tables around the top of their pyramid and jettisoned there victim’s bodies down the sides. It has been estimated that the Aztecs sacrificed about 250,000 people a year in this manner. Victims were mostly captured from raids and warfare but Aztecs who committed miner crimes such as infidelity or falling into debt could expect to receive the same treatment.

One thing the Aztecs weren’t is wasteful though, much like the North American natives who didn’t waste any part of the buffalo. When it came to human sacrife, the Aztec weren’t above having a snack. Hernán Cortés wrote in one of his letters that his soldiers had captured an Aztec who had a roasted baby ready for breakfast.  Many of the skeletons found in the basements of Aztec temples had cut marks, teeth marks and showed signs of boiling. It should be noted that the Mesoamerican diet lacked protein, however, systematically sacrificing and eating people is just plain evil.

#5 Khmer Rouge (1975 – 1979 AD)- Back to the Iron Age!
Killing all non peasants is a bad education policy and straight up evil. Lead by Pol Pot the Khmer Rouge government attempted some heavy handed social engineering, which lead to genocide. The plan was to go back to a pure golden age when the Cambodian people where farmers and they built the wonderful temple, Angkor Wat.  Everyone would work on collective farms and the country would be self sufficient. Everyone would be happy and equal, just like in mideval times! Let see how that worked out…

They killed 1 in 5 of their own citizens, the greatest percent of any regime in the 20th century. Between 1.5 and 2.5 million people out of a population of 7.1 million died. About half of them were executed, often in the infamous ‘killing fields’. To accomplish this horrific agenda the Khmer Rouge took children from parents and trained them to kill their parents who were “tainted with capitalism”. They had these youngsters practice torture techniques on animals then turned them loose on the population. Any one considered to be an intellectual was then killed. Teachers, doctors and engineers were rounded up and killed but anyone who seemed intellectual would be killed too. Having eyeglass for example could get you killed, or simply being a city dweller. Basically being anything different could get you killed, including being a minority.

Ironically the Khmer Rouge weren’t even good farmers and thousands more died from famine and starvation. Their decision to rely on traditional medicine and be self sufficient caused even more deaths from things like malaria. (It turns out traditional peasant medicine isn’t as good as Western medicine when the goal is to keep people healthy and alive). The entire population was forced to become farmers in labor camps, working exhaustive 12 hour days without breaks and working on forced labor projects. In the end about 2 million people died from starvation, preventable diseases, torture and murder under the Khmer Rouge although we don’t know for sure.

It turned out that the good old days kind of sucked, that the communist agrarian reformers didn’t know how to farm and that their method of going back in time was just plain evil.

NOTE: If your favorite evil empire didn’t make the list, stay tuned as the next five will be out soon.

8 Responses to The Most Evil Empires in History