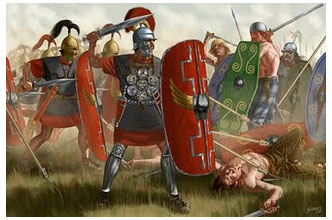 Roman soldiers are associated with some of the most iconic weapons of ancient history. The gladius (their sword) and the pilum (their heavy javelin) clearly identify the Roman soldiers to anyone at all familiar with ancient military history. In this article I just want to talk about those extraordinary, less known but no less awesome weapons of the Roman arsenal. For anyone looking for detailed information about the more mainstay Roman Weapons this link is a great resource. For those that want to know about the more unique and interesting ancient Roman weapons please read on!

The Plumbata (The Little Barbs of the War God)
Now in the world of the ancient Romans they considered the Goths to be the trail park trash of the ancient Mediterranean neighborhood. What does trailer park trash fear most? If you guessed a barrage of lawn darts you are correct!

The Plumbata is an awesome ancient weapon that may have been a game changer had it just been introduced a little earlier. Sadly they weren’t introduced until around the late 4th century, but even then two legions armed with them became the top legions of the military. Plumbata essentially provided Roman legionnaires with the ability to fire five salvos of missiles. These lead weighted lawn darts had the velocity to punch through armor and laid wasted to any horse or man unlucky enough to venture under a hail of them.

Modern tests reveal a range of about 144.6 feet (44 meters), quite a bit shy of the distance ancient composite bow could shoot (200-250 yards). I would think they would do considerably more damage though being essentially the same as an arrow but with a lead weight driving them down. Also they would be leaps and bounds less expensive then the composite bow which took about a decade to manufacture. Plumbata would also have the advantage of not being effected by weather and humidity like bows. Another possible advantage was that they could be lobed over obstacles. No matter what, being under a hail of these things would be terrifying to say the least, sending any attackers fleeing back to their trailers, err.. I mean wagons, the ancient version of the mobile home. 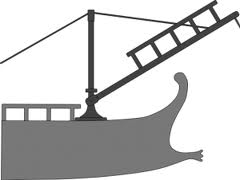 The Corus (That’s Latin for Raven)
As the Roman Republics sphere of influence grew it eventually bumped into that of the other great power in the Mediterranean, the Carthaginians. The Carthaginians were a great naval power, while the Romans were noted for the abilities of their heavy infantry. As is customary when two powers bump into each other a series of wars ensued. The winner of this best out of five series got to destroy the  others capitol, rule the Western Mediterranean and go against the winner of the Eastern Mediterranean conference to decide who would rule the Mediterranean world. Rome started off doing quite poorly in the first war do to its inexperience with naval warfare, but that’s when an ingenious plan was hatched, enter the corvus.

The Romans decided that since they couldn’t beat the Carthaginians in a traditional style sea battle, which consisted of maneuvering ships and ramming opponents, they would instead change the sea battles into land battles fought at sea. The corvus was then engineered. It was essentially a bridge that Roman heavy infantry could use to board opposing ships, playing to the Romans strength in toe-to-toe fighting.  The corvus was a bridge that could be dropped on the bow of the enemies ship using a system of pulleys and a pole to control it. On the end of the corvus a spike was attached, similar to birds beak, that would smash down into the deck of opposing ships in order to secure the bridge. At this point Roman soldiers would storm across and simply kill everyone aboard the opposing ship.

The Roman’s had a desperately needed string of victories in naval battles after first introducing it but the Carthaginian admirals and captains eventually realized that the corvus needed to be avoided at all costs. After the First Punic War the Roman naval crews became more skilled and the Carthaginians learned to avoid it the Romans abandoned their onetime secret weapon and it was dropped. However, some have suggested that the corvus may have been dropped after the first Punic war due to another reason. The Romans lost two naval fleets loaded with invasion forces, and hundreds of thousands of men when their fleets were caught by storms in the Mediterranean. These staggering losses are two of the top naval disasters in history. Some historians have attributed these disasters to instability caused by the corvus. The Roman’s may have come to the same conclusion, after these terrible disasters they seem to have stopped using them. Never the less the corvus was responsible for winning multiple naval engagements at a time when this was both mandatory (since they were fighting over Sicily, which is an island) and seemed extremely unlikely. 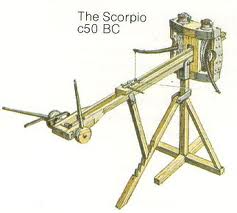 The Scorpio (Ancient Roman Crossbow/Catalpult)
This weapon operates like a large crossbow mounted on a speaker’s podium. The Roman’s employed these weapons whenever they had time, which usually meant siege type warfare. Luckily for the Romans siege works and trenches were common tactics in the first century AD. This weapon was greatly feared by those it apposed and it seems like it’s one of those ancient weapons that happened to be invented at the right time for the tactics being employed.

Basically the Scorpio was used like a cross between a modern sniper rifle and artillery. At a distance up to 328 ft  (100 meters) it could pick off individuals with unnerving accuracy. Let’s say there is a siege and some legionaries are assigned to fill in a ditch in front of a city’s wall, but the city’s guards are giving them trouble, this is a great time to employ a few scorpio. The scorpio could pick the guards off on the wall, making any would be defender hesitant to throw a rock or javelin down at the Roman legionnaires. Conversely they were mounted on Roman city walls and fortifications to devastate attackers. Although in these cases they might use the even more exciting method of firing, artillery style!

When used as artillery (parabolic shooting)  the range was increased to a whopping 1312 ft. (400 m) and the rate of fire went from once per minute to 3-4 shots per minute, however accuracy was seriously compromised. The Romans made up for this with volume, each legion was equipped with 60 scorpio, which can fire 240 bolts per minute.  At the battle of Avaricum Julius Caesar had surrounded a giant fortified town defended by an army of Celtic warriors, he placed his scorpio on a bluff where they could give covering fire to his men who were building massive siege towers and ramps. In his commentaries about the war he reported that the ancient Roman weapon inflicted horrific damage to the doomed defenders.

One Response to Ancient Roman Weapons