Civilization in the Ancient Amazon 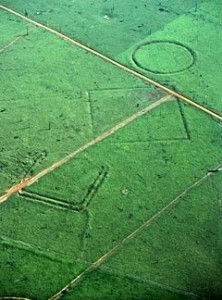 Satalites have revealed the location of scores of ancient Amazonian settlements.

When most people, including myself until recently, think about the tribes of the Amazon basin they think of small bands of semi-nomadic hunter gatherers who live in small villages. People assume, as did most scientists throughout the first half of the 20th century that this is how life has always been for the tribes of the Amazon. Why would civilization of the Ancient Amazon be any different? However, the conquistadors who first explored the area and reported it to the outside world told a very different story. They spoke of large, well organized cities with white buildings, canal systems and road networks. They reported dense populations spanning for miles along the many rivers, vast kingdoms ruling over thousands of square miles and complex societies that rival that of the Incas and Aztecs. Some tribes were peaceful, while others were as hostile and fearsome as Aztec warriors. These reports were long considered to be exaggerations, fables passed on by the Amazonian Indians like the golden city of El Dorado, but over the last forty years science has unearthed evidence that indicates these reports may have been much more factual than previously thought. It now seems that the pre-Columbian societies of the ancient Amazon were more a kin to known preliterate nations than to their ancestor’s tribes found in the region today.

In 1541 Spanish conquistador Francisco de Orellana inadvertently descended and explored the course of the Amazon. He described many rich, populace and advanced tribes that lived along the Amazon and had roads leading into the interior. Some tribes were savage attacking with their ancient weapons from canoes and opposing any landing the Spaniards attempted, others were advanced but warlike. The most deadly employed poison tipped arrows that killed men simply by grazing them. He also reported advanced, peaceful tribes that assisted him on his journey of thousands of miles down the great river system. However, over the next couple of hundred years these civilizations disappeared, seemingly without a trace. Yet, besides the earliest of reports some interesting facts remained. Amazonian tribes from diverse regions, cultures and language groups consistently told the same stories. Another clue is that some semi-nomadic tribes now found in the Amazon have the odd distinction among tribal indigenous societies of having a hereditary, yet landless, aristocracy. The Amazon is the only place in the world where an aristocratic class can be, or has been, found without a sedentary, agrarian culture.

The tribes of the ancient Amazon left no lasting monuments. However, lacking stone they used wood for their construction, a material which doesn’t last long in the humid climate of the Amazon rain forests. Another thing that has long been pointed out is that the soil is far too infertile to support agriculture, and therefore any large population centers. However, it is now apparent that the pre-Columbian tribes of the Amazon had a way around this problem as well, terra preta.

Terra preta, “black earth” in Portuguese, is a man made soil found throughout the Amazon. It is made by adding charcoal, bone, and manure to the otherwise infertile soil. Terra preta lasts for thousands of years and even has the ability to renew itself. Apparently, micro-organisms and fungi live and die in this porous soil, thus regenerating and even increasing its carbon content. Currently there is a hot debate in the scientific community about this soil and its implications that is tied to Amazonian conservation, land use and agriculture, but it does indicate that the Amazon tribes were able to farm vast swatches of the Amazon basin. Terra preta covers at least 0.1 to 0.3%, (6,300 to 18,900 square kilometres or 2,400 to 7,300 sq mi) of the low forests of the Amazon basin. Higher estimates calculate that tera preta covers 10% of the Amazon, over twice the size of Great Britain.

Over the past twenty years two sites have been uncovered that have sent shock waves through the scientific communities. First the culture of Marajo was discovered on a large island in the Amazons delta. The Marajo culture may have supported 100,000 people and created amazing advanced pottery. Archeologists have unearthed painted ceramics, some larger then a person, beautifully detailed with figures and well thought-out designs. Apparently Orellana wasn’t exaggerating when he said the artists of Marajo could rival any in Europe at the time.
Then in 1999 another great ancient Amazonian Indian society was discovered. The discovery was declared by the media to be the Lost City of Z or El Dorado, and it certainly has the grandeur of the legends if not the gold. Spread out over 7,700 square miles and supporting a population of around 50,000 people and including a network of over twenty towns,  Kuhikugu, was built on a scale rivaling that of the ancient Egyptians.  A vast network of roads and canals connected the cities, some of which were protected by palisades and moats, while the center of some of the cities featured large plazas over 500 feet long. They also constructed dams and ponds for fish farming and raising turtles. Kuhikugu thrived from around 500 AD until the arrival of the Europeans in the new world.

The conquistadors who reported these advanced Amazonian civilizations also sowed the seeds of their destruction. European diseases killed up to 90% of the Amazon’s Indians and the survivors fled into the jungle to avoid servitude to the foreigners. The jungle quickly reclaimed the fields and towns, leaving only a few clues of the once thriving Amazonian civilizations. These clues have only recently come into light, obliterating the long held perception that the Amazon was to harsh to support anything but small nomadic tribes.

An estimated 500 tribes currently reside in the Amazon, each with its own language, customs and territory. While all European languages stem from one language family, Indo-European, the Amazonian tribal languages stem from 42 families. Some groups remain “uncontacted” to this day.
Tribal life styles and uncontacted peoples can be defended through groups like survival international.